The Lords of Powder takes place during the height of Miami’s cocaine wars as a magician pursues a fortune smuggling and woos a gifted musician while eluding drug cartels and the police (Amazon link to eBook or print versions:  https://amzn.to/2Oe2ERA ).

In this elegant cross-genre blend of modern fantasy, historical fiction and action adventure, Bradan is 1500 years old, but only looks 30 years of age. He’s led a long, eventful life at various times fleeing Vikings and joining court-life in medieval Andalusia while trying to avoid being strangled in the palace dungeon. In 1978 Miami, he drives a haunted Volvo station wagon, keeps a high-strung wolf, and collects art for his Palm Beach condo. However, he needs money for his lifestyle. Lots of money.

Bradan uses his magical talents to organize a lucrative smuggling ring, but success brings him to the attention of violent players in the drug trade as well as narcotics detectives, the Coast Guard, and the DEA. He’s also forced to balance the profitability of his vocation with its consequences for his relationships, humanity, and survival.

This is the second work in this series, which includes the previously published The Lords of Oblivion (  https://amzn.to/2W9gMyf ). Each book can be read as a stand-alone story. 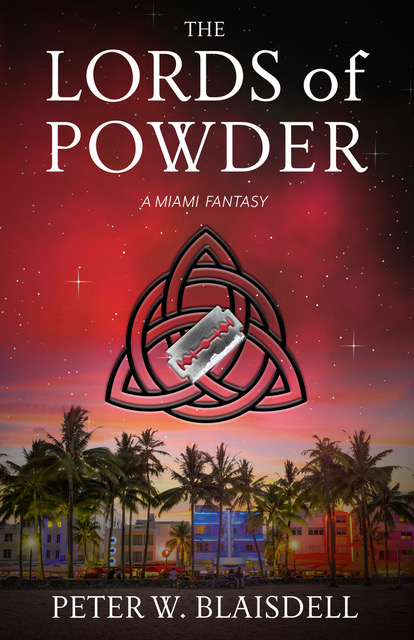 I write modern fantasy novels that are hopefully both exciting and literate. These novels include an on-going series about a near-immortal magician who grew up in Camelot and grew famous in San Francisco's 'Summer of Love'. He's still having adventures to this day described in The Lords of the Summer Season, The Lords of Powder, and The Lords of Oblivion. The books can be read in any order. As author S Alessandro Martinez has stated about the series: "Lords of Oblivion A 1500-year-old wizard. A pair of savage druids raised from the dead. Modern day San Francisco. A wolf that takes no gruff. Blaisdell creates a fascinating world in this magical realism novel with smart writing, complex characters, and clever use of history and mythology. I was sucked in from the very beginning. I look forward to more of Bradan and Tintagel's mystical adventures. Lords of Powder Merlin's former apprentice, Bradan, is back! The 1500-year-old wizard, who is sometimes too smart for his own good, returns for another exciting adventure, this time in 70s Miami as he takes on the criminal world of drug trafficking. Blaisdell's smart, fast-paced writing and use of fascinating history and mythology keeps you on the edge of your seat as Bradan uses his wits, charm, and illusions to navigate the modern era and get himself into plenty of trouble. Lords of the Summer Season Being Merlin's former apprentice and living for 1500 years is bound to make you a few enemies. Travel back to the 60s with Bradan the wizard and his otherworldly wolf Tintagel. As Bradan juggles careers as a professor and musician, he must defend himself from his greatest threat yet: a literal god. Blaisdell continues with his clever, skillful, and imaginative writing that will keep readers eagerly turning the next page. My favorite of the Bradan books, Blaisdell dives deeper into the Arthur mythology, and brings the reader even more elements of magic and folklore, all the while weaving an entertaining tale of gods, wizards, ghosts, and 60s acid rock. Thoroughly enjoyable!" Besides the literary side of my life, my background includes membership on a scientific advisory board for a non-profit professional organization promoting the biomedical and digital health business community in the greater Los Angeles area. I’ve authored both basic research publications and business management articles focusing on the bio/pharma industry. My Ph.D. is in Biochemistry from the University of Minnesota where I also conducted post-doctoral research in microbiology. And my BS is from the University of Michigan (Ann Arbor) with a double major in chemistry and cell biology. View all posts by Peter Blaisdell